As the nation continues to battle the COVID-19 pandemic, and with much of the country on lockdown, it may seem like we are living in unprecedented times. There are many open questions about the current public health situation, the outlook on the U.S. economy, and the capacity of the Federal Government to address these challenges. But there is some historical precedent for the magnitude of national crisis we are experiencing today. Our nation has experienced previous shocks to the system, which have been followed by a strong and sustained Federal response to these major events. It is important to understand how the Federal Government has responded to previous crises and the implications for government real estate.

As we try to make sense of our current situation, and as we consider the longer-term Federal impact, the events of September 11, 2001, come to mind. After the attacks, there was a significant expansion of Federal activity and spending to prevent future terrorist attacks at home and abroad. The establishment of the Department of Homeland Security in November 2002 was a direct response to the events of September 11. Moreover, other Federal agencies, including the Department of Defense and the Federal Bureau of Investigation, significantly expanded their functions to prevent future terrorist activity. Not surprisingly, funding for Federal homeland security activities at DHS and other agencies increased from $16 billion in FY2001 to almost $70 billion in FY2011 — an increase of more than 300 percent.

As the economy loses steam under the COVID-19 pandemic, we can expect to see large and sustained increases in Federal spending to promote economic growth.  During previous economic downturns, there were significant spikes in Federal spending as the government deployed a strong fiscal stimulus strategy to respond to the crisis and to jump start the economy.  This was true during the economic recession of the early 1980s, and it was true after the Financial Crisis of 2008-2009.  During the Great Recession of 2009, for example, Federal spending increased to a record 24.4 percent of Gross Domestic Product.  This increase was due in part to the American Reinvestment and Recovery Act of 2009 — the fiscal stimulus package that included $831 billion in new spending to provide temporary relief programs for those most affected by the recession and to invest in infrastructure, education, health, and renewable energy. 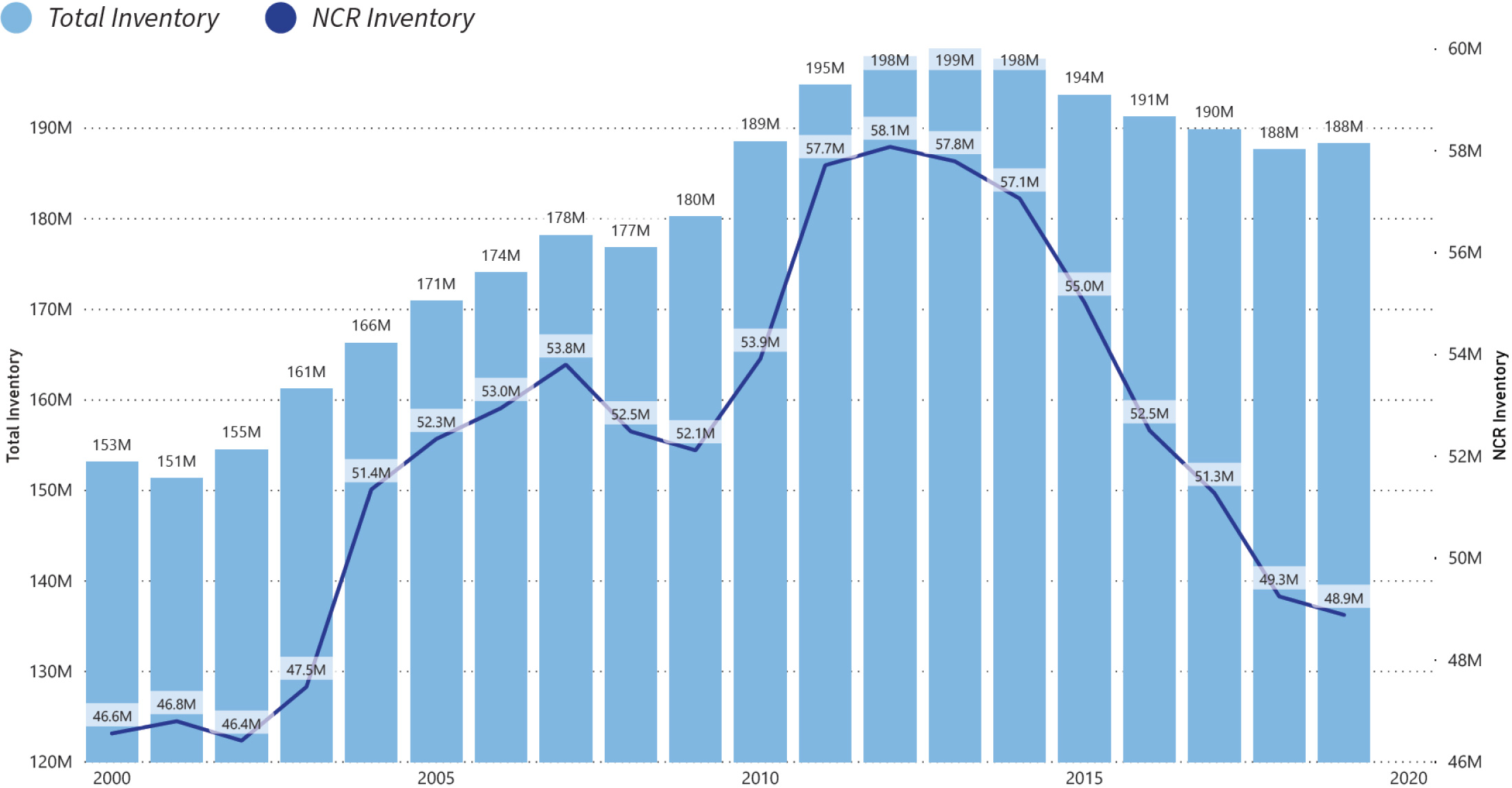 As Federal spending increased in the aftermath of both September 11 and the Financial Crisis of 2008-2009, so did the Federal real estate footprint. The chart above shows trends in GSA leased inventory over the past two decades. The data shows a significant upward trajectory in the amount of Federally-leased space in the immediate years after the September 11 terrorist attacks as well as after the 2008 financial collapse, both in the National Capital Region and across the larger GSA portfolio.

Given past history, how can we expect the COVID-19 pandemic to impact Federal real estate? We can start by examining the Coronavirus Aid, Relief, and Economic Security (CARES) Act of 2020. The fiscal stimulus package enacted by the Congress last week reflects more than $2 trillion in government spending, with a $340 billion boost for Federal operations and response efforts to combat the COVID-19 pandemic. Increased agency spending includes spending to enhance the nation’s public health infrastructure, including $500 million for the Centers for Disease Control and Prevention to modernize public health data collection. Agencies including the Department of Agriculture, Interior, and Health and Human Services will receive funding to expand their workforce. And the General Services Administration will receive $275 million, which will fund deep cleaning and enhanced screening at Federal buildings and provide for emerging space requirements to support agency efforts to deal with the COVID-19 crisis. Depending on the severity of the current public health crisis and economic downturn, the CARES Act of 2020 may end up being the first in a series of steps taken by the Federal Government to get the economy moving again.

As we think about the short- and long-term impact on Federal real estate, there are several factors that should be considered, and these factors might have conflicting effects on Federal occupancy statistics:

As the Nation battles the COVID-19 pandemic, history has shown how the Federal Government and the nation have been able to overcome these monumental challenges. The current situation provides an opportunity to reflect on the Federal capacity to respond to the current crisis and our nation’s ability to recover from this event. These types of events compel us to examine not just the Federal program infrastructure, but also the Federal real estate posture, for dealing with these major shocks to the system. As the Federal real estate strategy continues to mature and evolve, it must do so in a way that supports our nation’s resilience.

Norman Dong is a Managing Director at FD Stonewater and is the Former Commissioner of the U.S. General Services Administration, Public Buildings Service.